So - is this unseasonably mild, sunny weather a case (geddit?) of 'Last of the Summer Wine'? The final opportunity perhaps, to quaff a glass or two of chilled Sauvignon Blanc out on the patio (albeit in our balaclavas) before the clocks go back this weekend (don't forget!) Whatever the weather, it's certainly peak networking season out there, and if the number of events on NiS is anything to go by, the networking boom shows no…

Is Rooney Right to Stay? - Conversations with the football astrologer

IS ROONEY RIGHT TO STAY?
The view from Mars: cosmic insights from the football astrologer.

Wayne Rooney was worried. Would Manchester United win anything now that it appeared that they couldn’t compete with Real Madrid, Chelsea and Man City for the best (most expensive) players?

But did he really have cause for concern? maybe, but then again he could take some comfort from history: a good team has players who complement each other, said Sven-Goran Eriksson or as Sir… Continue

Yes, very true - your brand, your identity are well connected with your sustainable…

Many people have invested in with-profits funds over the years. When markets are down, with-profits fund managers often exercise something called a Market value reduction (MVR). This is essentially a penalty
for those withdrawing money from the fund. The purpose of an MVR is to reflect the underlying fall in values and to protect those who remain invested in the fund.

At times like this it is often best to sit tight until the markets recover and the MVR is withdrawn. However,…

(This newsletter went out at 01:30 today and it's already out of date, as we've just hit 200 Members thanks to Alan and Matthew who joined this morning...)

Things are still really buzzing here as NiS approaches 200 Members and Networking in Berkshire has passed the 330 mark. Now that NiS membership is free for the foreseeable future, it makes it even easier to recommend NiS to your contacts -…

How important are photos on someone's profile?

Its interesting when you look at the members page featuring all of us and how many don't have a photo attached.
It seems an anomaly in that we all seek to meet and make more business connections and yet some make it harder to connect by not having a photo.
Any of us that have at some time in our career had a job role which requires us to meet our client or supplier will have I am sure found themselves on the first meeting after numerous phone calls, commenting on…
Continue

Corporate Events... are they effective?

During the last 16 years Cinnamon active has organised and managed corporate events for clients from all industry sectors.

The corporate event is seen as a function by many as either a reason to deliver information to the team through meetings and conferences or just a "jolly" day out. An expense to the business.

In truth a corporate event is an investment, a strategic part of a Business Development plan.

A powerful tool to the development and…

Sponsorship gives the impression that only international brands and high salary footballers can benefit from these strategies, but that couldn’t be farther from the truth.

Sponsorship by its nature is a partnership opportunity for two organisations to create synergy. Synergy creates savings for both businesses and so should really be something every company should undertake – especially in an economic climate such as ours. Small businesses are even better…

Just received the Business Link newsletter with this little tip list - handy for first-time networkers and a good reminder for the rest of us.. take a look here -.7 habits of effective networkers

Thought I'd post my weekly Member email here on the blog for general viewing - so here it is...

Well, we’re certainly ‘hot to trot’ here in the NetworkingIn bunker, with both Surrey and Berkshire sites seeing record visitor numbers in September – 480 and 790 unique visitors respectively– fantastic! And our combined membership’s about to sail through the 500…

Just had a note here on the site from my old pal Paul Maung Maung - we used to work together in the travel industry many moons ago. 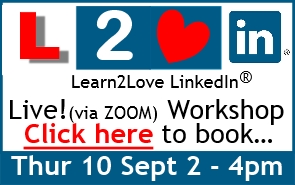