It’s still raining – but thank heavens we’re finally getting back to our traditional British weather! :0(  On the bright side, we’ve got lots of exciting national events happening this Summer to lift the spirits, and a bank holiday or two into the bargain. Hooray!

Before then, there will be lots of events on NiS which are opportunities to build and consolidate your business network. Make the most of them, because your network is one of the fundamental pillars of your business.

Please spread the word to your connections about Networking in Surrey! It’s a free resource - and as you know, it saves both time and money when you’re planning your networking diary, because you can find dozens of events on one site (including many free and pay-as-you-go ones, and one-offs you might not otherwise have found).

The numbers are all good, and we’re neck-and-neck with Networking in Berkshire now. Both sites have in over 930 Members as we ‘race’ towards the 2000 Members milestone (we’ll have a big celebration when we do!) Meet our newest Members here...

If you’re serious about your networking, please take a look at our enhanced Networker plus! Membership option here.  In line with the latest trends in the networking world, NiS+ offers additional benefits over and above our free basic membership.

Over the past year we’ve seen ‘added-value’ networking for SMEs offered by the likes of 4Networking with its mutual help business ‘Make It Happen Mondays’ (a Croydon group is planned soon), Nigel Botterill’s Entrepreneurs Circle with it benefits bundle including business-focused workshop networking events (featured on NiS), and Ecademy boardrooms, among others.

NiS+ is made up of several network-centric - new word! - elements (Boardrooms, The Hive, webinar opportunities etc) each of which alone would be worth the standard subscription of just £20 per month – so our launch offer of less than £10 a month is frankly an absolute steal! This deal ends on 30 May, after which NiS+ will still be a fantastic bargain – but get in before then and you can lock in the sub-£10 launch price for the duration of your NiS+ Membership (and you only commit to 3 months). Do it now...

Diary of a Networker...

Since the last newsmail on 16 April, I’ve been out there pounding those mean streets of Networkland as usual – I‘m the ‘Dick Tracy’ of networking here in Surrey – no snide comments please!

I missed the Richmond Expo (darn it!) but Mike Loughton told me it went swimmingly as always, when I saw him at the 4Networking Walton event for his excellent 4Sight presentation - and another great 4Sight was Sheree 'Shezza' Lowe's at 4N Kingston.  I’m doing one myself at 4N Twickenham next Thursday on the subject of effective networking, if you can make it. I'm also repeating my well-received Google Places Workshop in Cobham next Thursday...

I went to Tim Maycock’s Business Biscotti Heathrow for the first time – over 45 attendees, and they serve chocolate cake free with the coffee (and will be known as ‘Business Cakey’ from now on!) Tessa Hood, Geoff 'Mr McDonut' Chapman and I hosted our Cobham & Esher Biscotti this week and Jeremy Webb, Martin Wallman, Ian Crocker, Louise Camby and Maurice Watts were all present at a very busy and convivial meeting (with free filter coffee courtesy of the venue as the espresso machine had broken down!)

Last week I attended the Business Scene evening in Guildford with ex-Apprentice Kimberley Davis, and a raft of NiS Members including Alex Hill, Andrew Widgery, Lou Johnson and Tessa Hood. And I can’t end without mentioning the amazing NiS+ Member Veronica Pullen’s seminar at the Horley Business Expo last Friday. Despite a list of disabilities which would have pole-axed a lesser mortal, she’s built up a highly successful Social Media business and is a highly engaging and entertaining presenter too – words fail me to describe her wonderfulness!

Hope to see some of you at Sam New-Fielding’s leaving do tomorrow... meanwhile 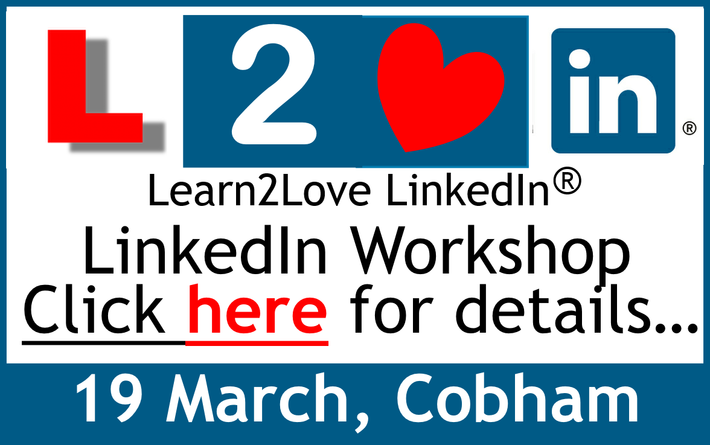